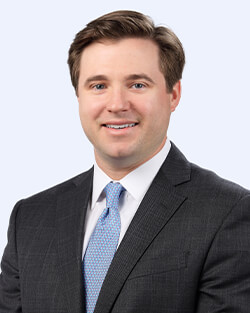 John “Reed” Poole, Jr. is an attorney with the law firm of Irpino, Avin & Hawkins Law Firm. Reed is admitted to practice law in Louisiana and Texas.  He is also admitted in the United States District Courts for the Eastern, Middle, and Western Districts of Louisiana.

Reed’s education includes an undergraduate degree from Louisiana State University in Economics and a Juris Doctorate from Loyola University’s New Orleans College of Law. Reed’s past legal experiences entail a significant amount of trial experience at the Orleans Parish District Attorney’s Office. Further, he subsequently practiced for over five years defending multiple national corporations and other large insurance companies throughout the State of Louisiana. Finally, Reed has previously served as general counsel for a transportation broker regarding their casualty exposure throughout the State of Louisiana.

Since joining Irpino, Avin & Hawkins, Reed has focused his efforts on the representation of individuals, residents, and commercial entities both within his local community and throughout the State of Louisiana. The unique combination of Reed’s past trial experience coupled with his former representation of large corporations and insurers allows him to provide a speedy, realistic approach to litigation; and further allows him to effectively navigate his clients’ legal matters toward a successful resolution. While not all cases result in a trial, each legal matter handled by Reed is prepared and treated as though the ultimate goal is a successful trial verdict.

Reed resides with his family in New Orleans, Louisiana. He currently serves as a representative of Orleans Parish in the Louisiana State Bar Association’s (“LSBA”) House of Delegates; and he also serves as an appointed member of the LSBA’s Unauthorized Practice of Law Committee. Finally, Reed is an active member of the Fore!Kids Foundation, who annually sponsors the Zurich Classic of New Orleans, and whose sole mission is to give back to the local community through donations to various children’s charitable organizations.